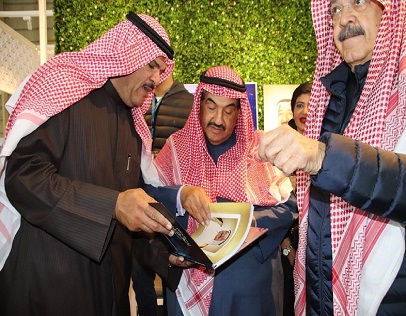 His Highness Sheikh/ Nasser Al-Mohammad Al-Ahmad Al-Sabah visited this morning (Friday) the 2nd Kuwait Aviation Show 2020, which is held under the patronage of His Highness the Amir of the country Sheikh/ Sabah Al-Ahmad Al-Jaber Al-Sabah, may God protect and preserve him, during the period from 15th to 18th of this January, and with the participation of governmental bodies, international organizations and global companies specialized in the fields of civil and military aviation.

Meanwhile, H.E. President of Directorate General of Civil Aviation Sheikh Salman Sabah Al-Salem Al-Homoud Al-Sabah stressed the government's interest in empowering woman in the field of civil aviation in all its sectors, indicating that the directives of His Highness the Emir of the country Sheikh/ Sabah Al-Ahmad Al-Jaber Al-Sabah are clear in supporting and qualifying woman and raising her capabilities as well as training her professionally.

At the symposium titled “Woman Empowerment in the Field of Civil Aviation ... Challenges and Aspirations" held on the sideline of the 2nd Kuwait Aviation Show 2020, Sheikh Salman Al-Homoud Al-Sabah said that the Directorate General of Civil Aviation supports opening this field for the Kuwaiti woman and would use all its capabilities to fulfill that.

Sheikh/ Salman Al-Homoud Al-Sabah welcomed the visit of His Highness Sheikh/ Nasser Al-Mohammed Al-Sabah to the show, pointing out that his Highness observed the latest innovations of the aircraft factories and companies specialized in civil and military aviation industries, and has also toured the stands of the governmental and private institutions participating in the show.