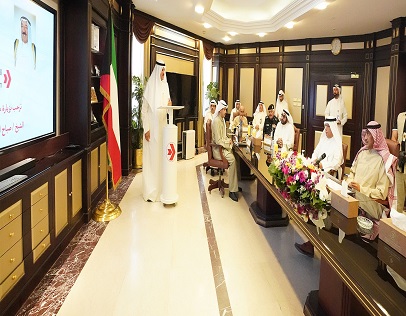 During his presence at the airport, His Highness the prime minister held a meeting with minister Al-Harees, Sheikh Salman Al-Homoud and senior officers of the aviation directorate. He was briefed about work at the facility during the crisis since outbreak of the novel coronavirus as well as preparations for repatriation of the Kuwaiti nationals from several countries.

Kuwait announced on Tuesday a phased plan to fly back Kuwaitis from abroad, namely in countries where the virus spread.

His Highness the prime minister, during the gathering with the officials at the airport, re-affirmed the government is acting according to instructions by His Highness the Amir Sheikh Sabah Al-Ahmad Al-Jaber Al-Sabah to speed up comeback of the nationals.

He lauded the aviation authorities for providing facilities for the Kuwaitis' return, as well as efforts by other national authorities in this respect.

The prime minister also visited on Wednesday the Kuwait Ports Authority, noting the paramount role of the custom personnel for facilitating entry of goods and products under the extraordinary circumstances. He proceeded to the containers' site to examine the work closely.