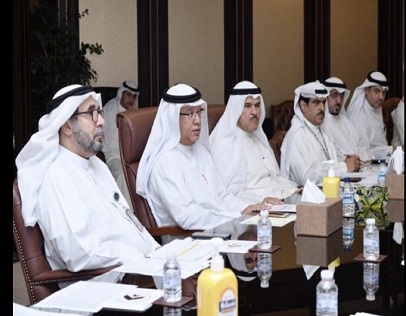 Meeting of the Higher Committee

During the meeting, Minister Al-Hurrais emphasized on the need to proceed with the work to raise the level of readiness in the operational sectors at Kuwait Airport in order to contain the spread of the Coronavirus in the country, pointing out that the directives of His Highness the Prime Minister Sheikh Sabah Al-Khaled are clear in providing support to all governmental bodies dealing directly with this virus, which has begun to spread in the world countries quite rapidly.

Minister Al-Hurrais said in a press statement after the meeting that he was briefed on the precautionary and preventive measures taken by the Directorate General of Civil Aviation since the announcement of the spread of Coronavirus in China last January, indicating that State of Kuwait was among the first countries that took firm and decisive actions, and that Kuwait International Airport was among the first airports in the world that prevented entry of passengers coming from infected areas, and also stopped and suspended the flights.

Minister Al-Hurrais pointed out that the way Civil Aviation has handled the situation was in line with the instructions of the health authorities in Kuwait since the start of the predicament, as the more the virus spreads in the world, the more precautions measures were taken at Kuwait International Airport.

Minister Al-Hurrais asked the officials of Civil Aviation to intensify the efforts so as to prepare for the launch of plan for evacuating the Kuwaiti citizens who are now abroad, and also the plan to evacuate the expatriates residing in the country who desire to travel to their countries, emphasizing on the importance of coordination with the Ministry of Public Health in this regard.