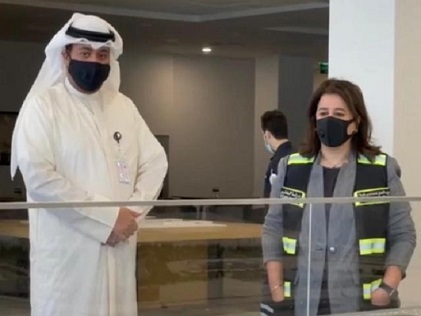 In a statement to Kuwait News Agency (KUNA), the Ministry of Public Works stated that during the visit, ways to overcome all challenges were discussed so as to execute the project’s components and to complete them according to the scheduled timeline.

The said statement quoted Sheikh/ Abdullah Al-Sabah as affirming his keenness to closely examine work progress at the project site, indicating the Management's readiness to overcome all challenges and enhance coordination and joint work to speed up the steps to complete the project.

The said statement indicated that the project represents one of the largest in the country’s development plan and aims to pioneer in implementing standards of Energy and Environmental Design (LEED) at the golden level, where as it will be the first passenger terminal in the world to achieve this level of environmental accreditation.

He added that the concrete structure of the new building of Kuwait International Airport will provide thermal mass, as the roof will include large areas of photovoltaic panels to produce solar energy.