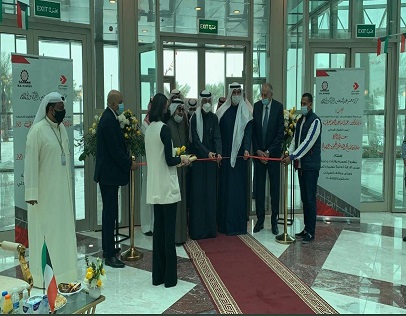 Civil Aviation celebrated the opening of the new headquarters

Under the auspices of the Minister of State for Housing Affairs and Minister of State for Services Affairs Dr./ Abdullah Abdul Samad Marafe and in the presence of H.E. President of Civil Aviation Sheikh/ Salman Sabah Al-Salem Al-Homoud Al-Sabah and the Director-General Eng./ Yousef Al-Fauzan, the Directorate General of Civil Aviation celebrated the opening of the new headquarters within a series of developmental projects for the Civil Aviation’s sector in the State of Kuwait.

Minister Marafe added, in a statement to the journalists on the sidelines of his inauguration of the new administration headquarters, in the presence of H.E. President of Civil Aviation Sheikh/ Salman Al-Homoud Al-Sabah, that the headquarters will provide a suitable and advanced environment in serving the Civil Aviation’s staff.

He pointed out that the headquarters is characterized by a superb architectural facade and is considered an advanced model in design and execution, and it is one of the modern buildings in the country.

He expressed thanks and gratitude to all those who contributed to the success of this project, whether the staff of Civil Aviation, headed by H.E. President of Civil Aviation Sheikh/ Salman Al-Homoud Al-Sabah, the contractor who executed the project, the consultant office and all relevant government bodies.

For his part, Civil Aviation spokesperson Eng./ Saad Al-Otaibi said in his opening speech that the new headquarters is considered a pride in the series of developmental projects that the Civil Aviation sector is witnessing in the State of Kuwait.

Eng./ Al-Otaibi explained that the administration building contains nine stories, in addition to the roof, the first basement and the second basement, with a total area of ​​67799.44 square meters, and it contains many different services that meet the needs of the building's users, including staff and visitors.

He indicated that the building accommodates 1570 employees, and is characterized by a dissimilar and unique architectural façade in the country.

He stressed that the new headquarters project will achieve, with God willing, a qualitative leap to improve the overall performance in the Civil Aviation system and will provide suitable environment for the staff towards greater efficiency and higher productivity.

He expressed his earnest thanks and gratitude to everyone who participated and contributed to the completion of this distinguished edifice, particularly the concerned government bodies as well as the project’s executing company and the consulting office.