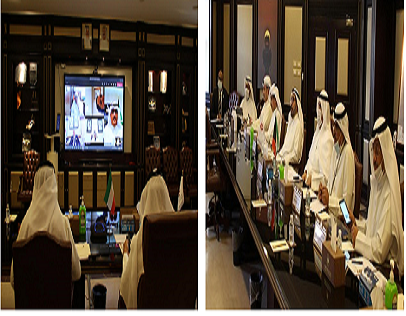 Today, the Higher Committee for Restarting Commercial Flights at Kuwait International Airport, in its 7th meeting, discussed the latest developments in commercial operation in light of COVID-19 pandemic, which was held under the chairmanship of H.E. President of Civil Aviation Sheikh/ Salman Sabah Al-Salem Al-Homoud Al-Sabah through a "virtual" meeting and with participation by the Assistant Foreign Minister for Protocol Affairs - Ambassador Dhari Al-Ajran, the Director-General of Customs General Administration - Consultant/ Jamal Al-Jalawi, the Undersecretary of Ministry of Interior for Ports Affairs - Major General/ Mansour Al-Awadi, the Director-General of General Secretariat for Planning & Development - Dr. Khaled Mahdi, the Acting Undersecretary of Ministry of Finance – Mrs./ Aseel Al-Munefi, and the Undersecretary of Ministry of Health for Public Health Affairs - Dr./ Buthayna Al-Mudhaf, in addition to the Director-General of Civil Aviation Eng./ Yousef Al-Fauzan and the representatives of Civil Aviation.

The rapporteur of the Higher Committee – Eng./ Saad Al-Otaibi said that the Directorate General of Civil Aviation made a visual presentation that included an evaluation of the operational plan during the past three months as well as a percentile statistic of the commercial operation from the beginning of August 2020 till the end of October 2020, indicating that the Committee has conducted a comprehensive review of the procedures applied to restart the commercial flights at Kuwait International Airport.

He added that the Higher Committee discussed he latest developments locally and internationally, and the procedures applied at the world's airports during COVID-19 pandemic as well as the means to deal with this pandemic.