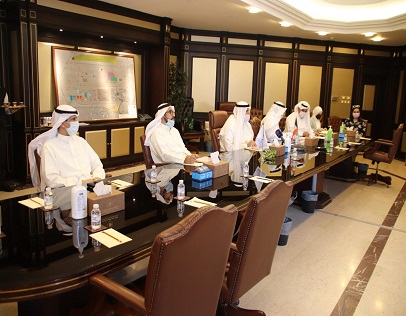 The Higher Committee for fulfillment of all technical and operational requirements of the new passengers’ terminal (T2) at Kuwait International Airport held today (Wednesday) its first meeting chaired by H.E. President of Civil Aviation Sheikh/ Salman Sabah Al-Salem Al-Homoud Al-Sabah and the membership of the concerned government bodies, through a virtual meeting.

The Higher Committee discussed ensuring that the passengers’ terminal (T2) is ready and satisfies all technical requirements for the facilities and systems, thus fulfills the needs of all future operations to make the terminal a smart airport, including the linkage of systems and networks to the new passengers’ terminal as well as all buildings of Kuwait International Airport for all bodies operating at Kuwait International Airport, in accordance with the latest technologies approved at airports in line with the timetables determined towards this purpose.

The committee will undertake ensuring fulfillment of all necessary requirements for the success of the operational readiness program, and verifying that all concerned parties have satisfied the requirements for operation in order to achieve the transition process into actual and successful holistic operation, as well as ensuring that all concerned parties have realized the technical and operational requirements to complete the approval process for receiving the facilities and transition from the authority responsible for construction and completion all the way until to the authority in charge of licensing and operation.