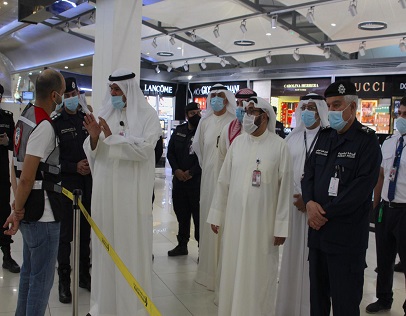 H.E. President of Civil Aviation, Sheikh/ Salman Sabah Al-Salem Al-Homoud Al-Sabah, confirmed the successful launch of day one of the first phase of the plan to resume commercial flights, with solidarity and collaboration of all governmental and non-governmental bodies operating at Kuwait International Airport.

Sheikh/ Salman Al-Sabah said in a press statement, that pursuant to the decision of the Council of Ministers in its meeting held on 29 June 2020 concerning the gradual return of commercial operation, the Higher Committee for Return of Operating Commercial Flights has taken all necessary measures to implement the approved plan and resume operation in accordance with the required health restrictions.

H.E. President of Civil Aviation praised the great efforts being made by the Ministry of Health during this phase of resuming operations, whereby this Ministry had a key and clear role in confronting Covid 19 pandemic in the various fields and sectors, appreciating the efforts exerted by the staff of the Ministry of Health at Kuwait International Airport.

Sheikh/ Salman Al-Sabah called on all travellers and operators in the airport terminals to adhere to the health restrictions and guidelines as being issued by either the Ministry of Health or the Directorate General of Civil Aviation.

Sheikh/ Salman Al-Sabah praised the efforts of all employees of the governmental bodies that participated in the plan of resuming commercial operation, particularly the Ministry of Interior, Ministry of Foreign Affairs, Ministry of Finance, General Administration of Customs and the General Secretariat for Planning. Thanks are also extended to all employees of the Directorate General of Civil Aviation, all airline companies and service providers at Kuwait International Airport.

H.E. President of Civil Aviation - Sheikh/ Salman Sabah Al-Salem Al-Homoud Al-Sabah, accompanied by the Director-General of Civil Aviation - Eng. Yousef Sulaiman Al-Fouzan, the Assistant Undersecretary for Ports Affairs - Major General/ Mansour Al-Awadhi, and a number of officials of the bodies operating at the airport, made an inspection tour to observe the work progress during the first day of the plan to resume operation of commercial flights.